A combination of a traditional cotton bleaching method with a 300-year history and chusen dyeing technique has created colorful yukata. 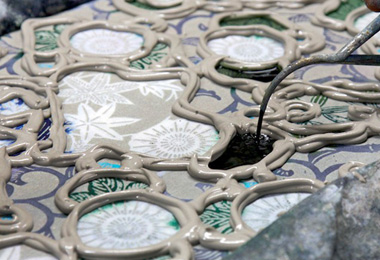 The Ishizugawa River and Sakai’s wazarashi cotton and yukata

In the 17th century, the industry for bleached cotton called wazarashi started in Sakai City in the Kena region, which lies along an affluent river called the Ishizugawa River. The industry has its origins here because this region was blessed with natural advantages of plentiful water and broad land area exposed to sunlight required to make wazarashi, plus it was conveniently located about midway between the cotton textile production center in Senshu and wholesalers in Osaka City.

The dyeing industry for yukata (casual summer kimono) developed in Sakai during World War II, when the industry fled from war-damaged Osaka City to Sakai, home to wazarashi cotton.

The technique used for dyeing yukata is a traditional hand-dyeing method called chusen, which was developed at the beginning of the 17th century.

Chusen is a kind of dye blocking method using glue. A special pattern made by using a knife to carve a design on Japanese paper covered with persimmon tannin (called an Ise pattern) is placed on bleached fabric and glue is applied over the pattern. After the pattern is removed, the remaining fabric is carefully folded up and the pattern is placed back on the fabric. This process is repeated until the entire fabric is folded up. Then, dyes are poured onto the fabric to dye the parts where glue was not applied. Since both surfaces of the fabric are colored at the same time, it rarely fades even after being used for a long time.