Originating in ancient times, Sakai Blades acquired a high reputation with its tobacco knives in the Edo period. 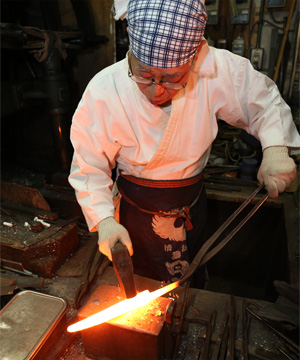 Sakai’s cutlery industry began to flourish in the 16th century, when tobacco was introduced into Japan from Portugal. Tobacco came to be cultivated in Japan, which created great demand for tobacco knives to chop tobacco leaves, and the manufacture of tobacco knives started in Sakai. Since tobacco knives made in Sakai were sharper than imported ones, the Tokugawa Shogunate allowed them to be stamped with “Sakai Kiwame” hallmarks in the Edo period (early 17th century to late 19th century), winning national fame.

In this way, Sakai Blades found root in tobacco knives, and the foundation of the industry was established at that time.

Also, in October 2007, Sakai Blades and Sakai Traditional Blades were registered as local community trademarks by the Japan Patent Office.