Kelp, fruit of the north, crossed the sea to Sakai to be processed exquisitely by skilled craftsmen. 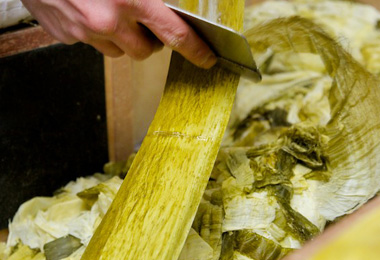 It is believed that growth of the kombu (kelp) processing industry in Sakai is closely related to the transport route of kelp from Hokkaido.

The route, called the Kombu Road, is a sea route from Hokkaido via Tsuruga, Obama and Shimonoseki to Osaka and Sakai through the Sea of Japan, where waves are gentle.

Originally, kelp was unloaded at Tsuruga or Obama and transported to Otsu by road and then went down the Yodogawa River to Osaka. However, in the 17th century, the sea route to Osaka and Sakai was opened and a large amount of kelp started being unloaded at the Port of Sakai.

It is believed that around this time, full-scale development of the kombu processing industry in Sakai was in progress.

There are mainly two types of kombu that are produced in Sakai: tororo and oboro, both of which are finely shaven kombu. Tororo kombu is produced by machine; however, Oboro kombu is hand-shaven by skilled craftsmen in order to maintain its high quality.

Types of kombu and their characteristics